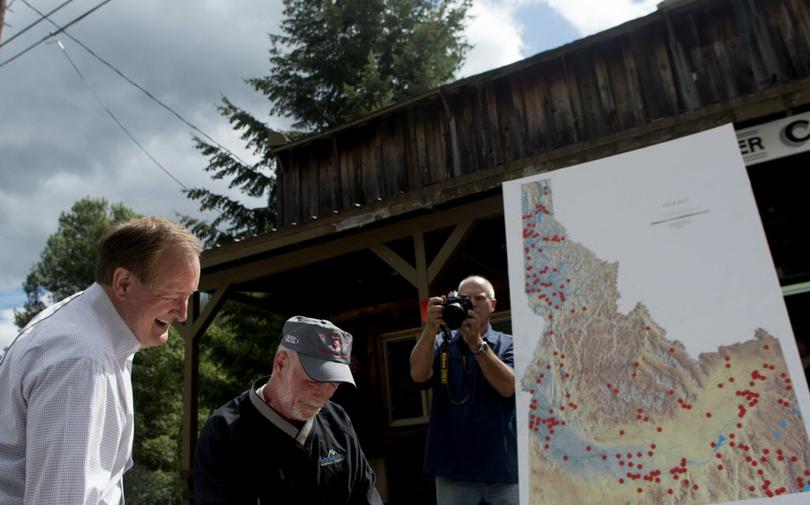 From Aberdeen to Worley, from Bonners Ferry to Blackfoot, Idaho Sen. Mike Crapo has visited every incorporated Idaho city over the past two years – all 200 of them.

His aim was to hold hour-long, town hall-style meetings in each city, but some of the towns didn’t have any halls. In those cases, the meetings took place in parks and once, in Placerville, a mountain town in southwest Idaho, under a picnic shelter in a chilly September rainstorm.

“We fit people in under there and just had a great town meeting,” Crapo recalled.

Crapo finished his marathon of town meetings this past week in Wardner, in North Idaho’s Silver Valley. Thirty-seven people crowded into the tiny City Hall to talk about the federal reserve, mining regulations and internet service in the Silver Valley, among other things.

North Idaho GOP stalwart Ruthie Johnson, a former longtime aide to the late Sen. Jim McClure, attended the Wardner session and greeted Crapo, Idaho’s senior senator, with a hug; she said she can’t recall any other Idaho senator making such an extensive swing around the state. “I worked for one, and we got around the state a lot,” she said, “but this is just amazing.”

Johnson said Crapo “ really listened to the people when they asked the questions or gave their opinions on things.”

Dennis Fretheim, a Smelterville retiree who said he’s a liberal Democrat and disagrees with Crapo on just about everything, asked Crapo about Bernie Sanders’ contention that much of the new wealth in the country is going to the top 1 percent. “I thought he was a gentleman,” Fretheim said, though he didn’t feel like his question was answered. “He treated me very decent, I was very impressed that way.”

“It has been an incredibly wonderful experience,” Crapo said Friday. “I thought I had been to every town in Idaho, but I found out there were a few that I hadn’t been to. And I’ve had the opportunity to meet a lot of new people, I’ve had the opportunity to re-engage with a lot of friends, and of course talk a lot about America and Idaho and what’s happening in our government.”

Crapo said the idea formed during a scheduling meeting with his staff in 2014. “I just felt that we ought to go to every town,” he said. “One of my staffers raised her hand and said, ‘How about we start with the incorporated towns?’” That meant 200.

“We were all like, ‘Really’?” said communications director Lindsay Nothern. But the plan took shape, and the first meeting was in Moyie Springs in October of that year. The largest have drawn as many as 200 people; the smallest, as few as two. Most had at least a dozen.

The smallest city was Warm River in eastern Idaho, which officially has a population of just three. “There were nine people there,” Crapo said with a grin.

He began each meeting with a talk about his concerns about the federal debt and expanding government regulations, then let participants ask whatever they wanted. “The people wanted to talk about the debt – they came with notes about what’s going on with the economy and our debt,” Crapo said. “And the other thing is they are very concerned about big government – it was a constant in every town meeting.”

One eye-opener for the third-term senator was the amount of constituent case work that his office developed out of the meetings. For example, “Our veterans case work has gone up almost 150 percent,” he said. As the meetings evolved, he began planning to have one or two staffers stay behind after he was finished, to work with individuals and explore problems they’d been having with federal agencies and the like.

As he seeks a fourth six-year term in the Senate, Crapo is facing a Democratic challenger, Jerry Sturgill, a Boise businessman. Sturgill said he has no criticism of the town meetings. “I think that’s brilliant, actually,” he said. “It at least demonstrates that he’s trying to show people he cares, by trying to get out and talk to people – which is good. I would do the same thing.”

Crapo also faces a third candidate, Ray Writz of the Constitution Party, in the November election. Writz said of Crapo’s string of meetings, “Well, that’s a good representative, trying to touch base with people.”

Over the nearly two years of town-hall meetings Crapo said he encountered plenty of emotion, from anger to tears.

“Let me put it this way, people are angry,” Crapo said. “They’re angry that the government’s not working right, and that anger came out. There were very direct questions and comments about what’s happening in our country.”

He added, “People were very candid and very pointed, but they weren’t mean about it.”